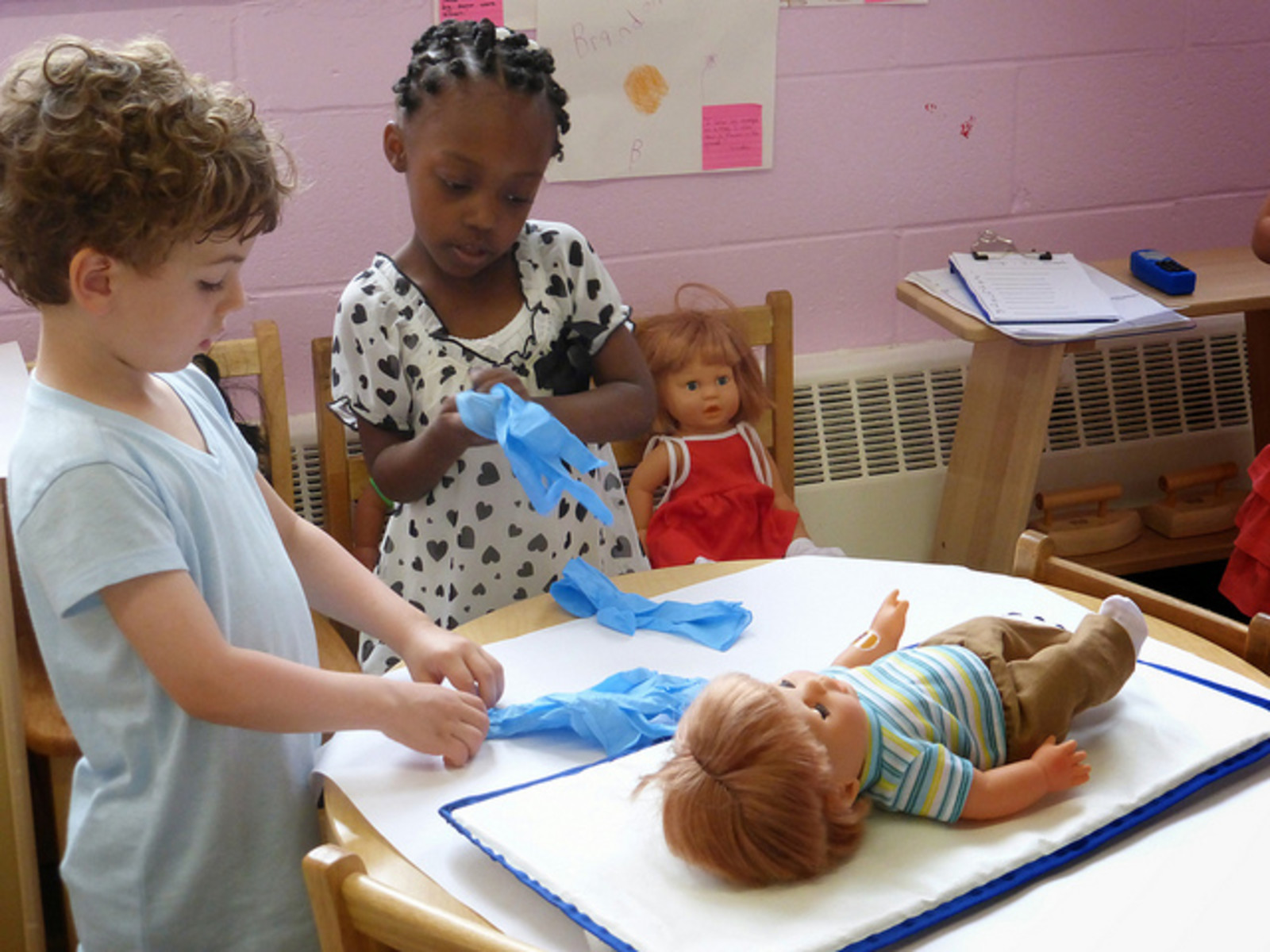 Recently I spoke to educator Chip Wood, a co-founder of Responsive Classroom, an approach to teaching based on the belief that students do their best learning in a classroom where they also practice cooperation, empathy, responsibility and self-control. Responsive Classroom is used in many New York City public schools.

Here’s what Chip Wood looks for in a pre-k program:

Room to roam: “Four is an age of exploration,” Wood says. “If there isn’t much space for movement, that’s something I’d be worried about in a 4’s classroom. If you fill the room up with furniture, you have kids running into furniture.”

Low clutter quotient: Take a “quick clutter quotient,” as he calls it. “I’m not so keen on store-bought posters and bulletin board decorations. I like to see children’s work posted with museum care.” Fours are typically not reading by sight yet, he explains, so posters are likely for the benefit of parents and supervisors. In a good pre-k, what’s on the wall “should be for the kids, at their eye level.”

Circle time: Ideally Wood would like to see space for a 9 x 12 rug that can fit 18 children and two adults for short periods of instruction, movement, read-aloud time and singing.

Outdoor classroom: “Is it just an empty playground space—or does it have equipment suitable for very young children? Look for riding toys, a water table. There should be extra raincoats and rubber boots on hand so kids can get outside every day.”

Job chart: “I would want to see a job chart, see that kids were going to be responsible for packing up snack, putting smocks away, real jobs kids can do at clean up or other times.”

Music and Art: There should be evidence of both music and art, Wood says. “One key thing to look for is a standing easel rather than just paper on the desk.” Four is the age of big muscle activity—an easel fosters movement.

Language: “You want to hear teachers asking kids what’s going on for them. That sense of being known.” Teachers should make sure kids understand what they can and should do, not just what they shouldn’t do, he says.

Self regulation: Some classrooms utilize "mediators" such as laminated cards with a picture of an ear or a mouth, so when kids look at a book together, or take turns listening to a partner, they can hold the picture as a reminder. “To help them build their ability to wait, also known as self-regulation,” Wood says. Teachers may also model how to do this.

Partners: “I’d want to see kids in partnerships, in twos. That is the foundational work for being able to do group work later on.”

Blocks: Wood bemoans the fact that block building has all but disappeared from kindergartens as pencil and paper academics are pushed to the early childhood years. After all, “blocks were born in New York City, in the progressive education movement,” he says. “Kids would go out and look at buildings and come back into the classroom and build them. It helped kids develop symbolic understanding, that the blocks stood for something else.” Blocks are also a foundation for math and physics as kids experiment with ratios, proportion and balance in a physically concrete way. Fours use big blocks, often building structures they can climb into themselves. The teacher might replace big blocks with smaller ones the second half of the year, he says.

Things to avoid: Too much time spent sitting still, listening to the teacher. Coloring in the lines, worksheets writing letters and numbers, rather than constructive exploration and play.

Play, not too structured: “I would want to see that play is highly valued, not too structured,” Wood says. “There is so much social pressure on families and kids around academic skills that now the major presenting factor in pediatricians’ offices is anxiety, even in little kids. The opportunity to play is the social foundation for learning because schools are social environments. It’s also the cradle of democracy, building the ability to be positive and constructive with people you don’t live with.”

Wood says, “Anthropologists say we learn in order to be effective in the world. The tools, reading and writing, are important, but they will come more easily if kids learn self-regulation, cooperation and empathy. If they learn those skills the academics are going to have a very strong foundation from which to grow.”

Chip Wood is the author of Yardsticks: Children in the Classroom Ages 4–14. The Center for Responsive Schools has pamphlets on developmental milestones for 4, 5 and 6 year olds as well as for older children.